Aside from providing effective and specialised legal advice, an important component of our philosophy rests on the understanding of cultural differences between Western Europe and Greece as a bridge to the East. Being fully aware of our role as a mediator between this difference in beliefs and forms of approach, it is very important for us to be seen as a reliable partner for both our clients in the business world as well as for our private clients. Personal and individualised consulting is the centre of our activity.

Our law Office is able to address clients in Greek, German, English, Spanish and French, while an external associate is available to provide assistance in Arabic. 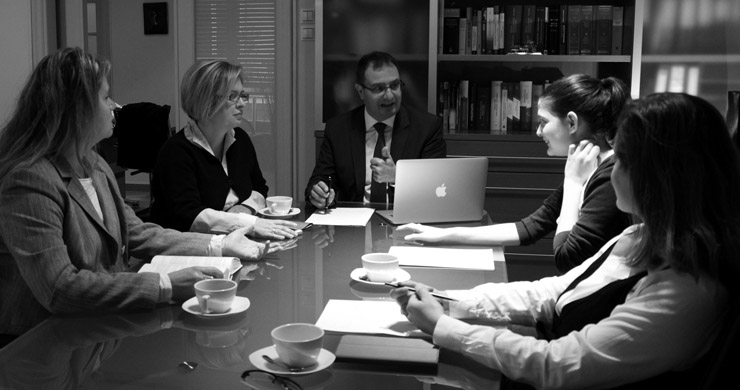 We engage in typical legal matters while also providing advisory services. We are a European and internationally oriented team of Greek and German practising attorneys collaborating with experts in different fields as needed.

Our mission is to work alongside our clients in developing solutions. In our endeavour to succeed within a framework of comprehensive services and preliminary planning to resolve specific issues, we work with experts in a variety of fields, such as specialists in the areas of energy, property and construction, IT, taxation and public relations.

The law firm was founded by attorneys Vassilis Gerold Karkazis and Kaliroi Dimopoulou. The firm maintains its Greek main offices in Athens and its German offices in Cologne. Through a network of associates, we are also active throughout Germany and Greece, as well as other countries in the EU, the USA, Canada, Turkey and Switzerland.

The range of work extends from providing advice, planning and performance of projects to deciding to avoid lengthy litigation and achieving the most successful outcome of any essential judicial proceedings. Personalized, individual legal advice is at the core of our business.

For many years, we have supported and represented Greek colleagues and their clients in Germany and Austria in matters pertaining to sales and purchases, property leasing, estate and family matters and in the collection of receivables or in clarifying legal or other issues relating to the legal systems of these countries.

We are members of the following associations, unions and cultural organizations:

// Consultant of the FEDERAL ASSOCIATION FOR ECONOMIC DEVELOPMENT AND FOREIGN TRADE, BWA, for GREECE.

// Consultant responsible for Greece of the NETWORK OF GERMAN INHERITANCE LAW EXPERTS E.V.

// Founding member of the European Union Club of Athens

// Founding member of the Diplomats and Friends Sailing in Greece Team

Our network of associates in Greece comprises experienced attorneys based in Thessaloniki, Crete (Herakleio, Chania), the Peloponnese (Nafplio, Tripoli, Patra, Kalamata) and in a number of Greek islands, including Rhodes, Kos, Naxos, Syros and Kefalonia.

However, our network of associates also includes other European countries, such as Czech Republic, Austria, Italy, Spain and Turkey. Our global network extends to countries such as the United States, Canada, Dubai and South Africa.

Especially in Europe and Greece of today, it is important for us to talk to each other and not just about each other. We therefore also engage in the field of culture and sport, or the exchange of information and opinions beyond the borders of the country.

// For example, Organization of sailing events and sailing courses to meet Greeks and “foreigners” living in Greece e.g. within the framework of Sailing for Diplomats and Friends.

// For example, Excursions to archaeological sites of Greece.

Here we exhibited works by the German-Greek painter Paul Saroglou in our offices. The opening speech of the exhibition “Floating” was held by deputy ambassador of the Federal Republic of Germany, Mr. Guy Féaux de la Croix. The Vernissage found her musical ending with the voice of the young mezzosopranist Barunka Preissinger. She enthused the audience with works ranging from Brahms over the Blues to German and Greek Christmas songs.

// For example, Support for Greece as a business location, exchange at national and international level in the area of ​​culture, politics and society within the framework of the “Marathon Friends International Association” and “Friends of Greece”.

// For example, Exhibitions with Cypriot and other German ore Greek artists such as Melina Stilianou or the artist “Stringou”.